Join us in congratulating Kristin Caron from the 58th District Court Probation and Community Corrections, who has been recognized as Ottawa County’s Outstanding Customer Service Award recipient of the second quarter of 2015.

The individual who nominated Kristin wrote: 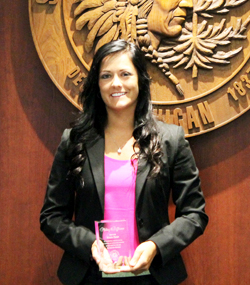 "I was told by a coworker of an incident where Kristin was working and provided an example of outstanding customer service and I would like to see her recognized for her actions. Kristin had been at work conducting home checks and during one stop she noticed something to be off about a probationer's behavior. Upon asking the probationer if everything was alright, that person confided that she was upset and considering self-harm. Kristin asked whether or not she had a plan to harm herself, and after she was shown the tool the probationer planned to use to harm herself, Kristin asked if she could turn the tool over to the individual's social worker who lived nearby and was able to remove the tool from the home. Kristin then went out of her way to go to the store and purchase a journal and some pens and returned to the distressed probationer's home and recommended that the person try journaling when they were feeling overwhelmed. When I heard about this from a coworker, I was extremely impressed with the level of care and thoughtfulness Kristin demonstrated in her actions. She went above and beyond by reaching out to the individual to ask what was wrong and then taking the additional steps well outside of what is required of her to prevent the individual from harm. Not only did Kristin prevent harmful behavior, but she also provided a healthy outlet for the individual to express her feelings in similar future situations. Kristin has been involved in her current position for less than a year and although she is relatively new to field supervision, she demonstrated concern and compassion that perfectly exemplifies the standards the 58th District Court hopes to set for customer service and community outreach."

I have been employed with Ottawa County for just over eight months.

The thing I like most about working for Ottawa County is the opportunity given for professional development and the encouragement for it from fellow co-workers and supervisors.

The hardest thing I have ever done is leave my newborn niece at the Neonatal Intensive Care Unit after she was born three months early. She was the family addition we all were waiting for and we were unsure for a while if she was going to make it. She is now a thriving healthy toddler keeping up with everyone her age.

You would be surprised to learn that my family owns a small blueberry farm and I have been a farm laborer since the age of five.

If I could have dinner with anyone dead or alive, I would choose to have dinner with my brother who unexpectedly passed away when he was three years old. I yearn to know more about him and who he would have been as a person. I would also love to have my parents accompany me to this dinner so they would have the opportunity to reunite with their son.

If I had to spend all of my vacations for the rest of my life in the same place I would go to a getaway home in the middle of nowhere of Southeast Ireland surrounded by rolling hills and countryside.

If I could travel back in time to any certain era or event I would travel to the Women’s Suffrage Movement when women were granted the right to vote. I am curious to see how the movement progressed and how much patience was needed by activists in order to see results. Present day movements seem so much easier than the past with the advances in technology and social media. It would be a unique experience to see what they had to go through without the benefits of technology.