Join us in congratulating Rachell Genesky from the County Clerk’s Office, who has been recognized as Ottawa County’s Outstanding Customer Service Award recipient for the second quarter of 2016.

The individual who nominated Rachell wrote: 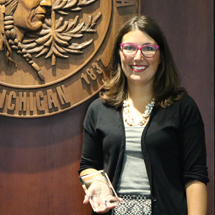 I would like to take a moment to share with you the amazing efforts of one of Ottawa County’s finest. Last Friday a family was traveling from the United States through Canada on their way to New York, to visit family for Father’s Day. They called the Ottawa County Clerk’s Office, an hour before the office closed, in a panic. Shortly after they crossed the Canadian border, they realized they did not have their 11 year old son’s birth certificate with them. Getting into Canada without this document was not a problem; it was getting back home that was the concern. Rachell Genesky fielded the phone call, and listened to the family describe what could potentially be a vacation disaster- as they were stuck in Canada without their son’s birth certificate. Michigan’s state statutes are very strict when it comes to issuing birth certificates. Statutes define limitations on what identification processes must be adhered to before issuing any birth certificates. In addition, only hard copies can be mailed to the applicant of record (or their parents) at the home address- and policies state these records cannot be mailed outside of the United States. Rachell calmed the distraught parents and devised a plan that stepped outside the realm of the norm, all the while adhering to the regulations state statutes defined. She had the parents apply for a copy of a birth certificate through our online website, patiently overcoming each and every technical difficulty the couple encountered. She then obtained contact information for the Canadian border patrol agency and asked her supervisor to communicate with the border patrol agents the situation this family was in. An agreement was made with the border control to issue a government use only email version of the 11 year olds birth certificate, which they were willing to utilize as acceptable documentation. By the time the family arrived at the border, the agent had their documentation in hand, and was able to assist them in reentering the United States. The praise the family gave to Rachell was heartfelt and abundant. They were so grateful to her for all of her patience, effort and professionalism. They couldn’t believe a government employee would go to such lengths to assist them the way she did. Without the creative out of the box thinking on Rachell’s part, the family’s travel plans to visit their grandfather on Father’s Day would have been a complete mess. The family would have had to drop one of the parents off at a hotel with the child and wait while the other parent drove back across the border all the way to Ottawa County; all the while hoping they had a certified copy of the child’s birth certificate at home (being the County office would have been closed by then); and then drive back to Canada again. If ever there was an employee that exemplifies the true meaning of the Ottawa Way -Rachell is it!

Gaining a better understanding of how the County operates and the having the ability to connect with so many people from all over the community. Having grown up in Ottawa County, moved away and then moved back, it’s been great to have a chance to connect with other residents (coworkers and customers alike) and hear what it is they love about the community we all share.

Thinking about how to answer this question!

I was a comic scholar in college - I got my BS in English with a focus on Children’s and Young Adult Literature and I spent the last two years authoring and presenting at various conferences focused on graphic novels and comic books.

I’d love to have dinner or chat over coffee (about world views, feminism, writing, etc.) with Chimamanda Ngozi Adichie, author of Americanah and We Should All Be Feminists (just to name a couple).

This feels like a trick question – there are so many amazing places that I’ve yet to visit! If I had to pick based off of where I’ve been so far, it would be Chicago. So many good food options, excellent array of used bookstores, cultural events and the ability to sit by a large body of water.

I’ve always found Arthurian times in England and Ireland really fascinating and would love to travel back in time to witness day-to-day events.