Join us in congratulating Deputy Brad Bennett from the Sheriff’s Office, who has been recognized as Ottawa County’s Outstanding Customer Service Award recipient for the third quarter of 2015.

The individual who nominated Brad wrote: 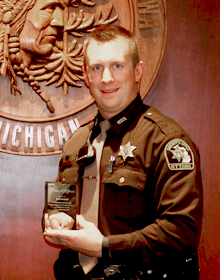 On 7/21/2015 my father, my mother and myself were on our way home from Ann Arbor where my father was getting a biopsy done because we recently found out he has cancer, needless to say, it's been rough lately. When we were driving through Coopersville our car broke down on the side of the highway. Officer Bennett pulled over and was extremely kind and helpful. He took my dad to get gas and he then filled the car for us, he stayed while we tried to start it but unfortunately it wouldn't start. He gave us a ride to the gas station where the car was being towed to. He had to leave after that but we did end up getting the car started. With all the negative attention police officers are getting lately I think the positive needs to be talked about too! He gave me a great memory with my dad that I will never forget! If this somehow reaches you Officer Bennet, Thank you so much for your service. You are a wonderful person and a great role model!! Thank you for making our day!

I worked 4 years with the County as a Sheriffs Cadet and I am currently in my 3rd year as a Sheriff’s Deputy.

Last year I was able to participate in the Police Unity Tour, which is a 300+ mile bicycle ride spanning 4 days starting in Florham Park, NJ and ending in Washington D.C. to honor Police Officers who have died in the line of duty.

I have 7 Police Officers in my family.

I would choose to have dinner with my Grandpa and Grandma Bennett. It has been years since they have both passed away and it would be nice to spend some time with them again!

I would go to Paradise MI and Steelhead fish the Two Hearted River!

I would travel back to February 22, 1980 at the Olympic Center in Lake Placid, NY to watch team USA beat the Soviet Union in the "Miracle on Ice".